The Colossus of Prora, Island of Rügen, Germany 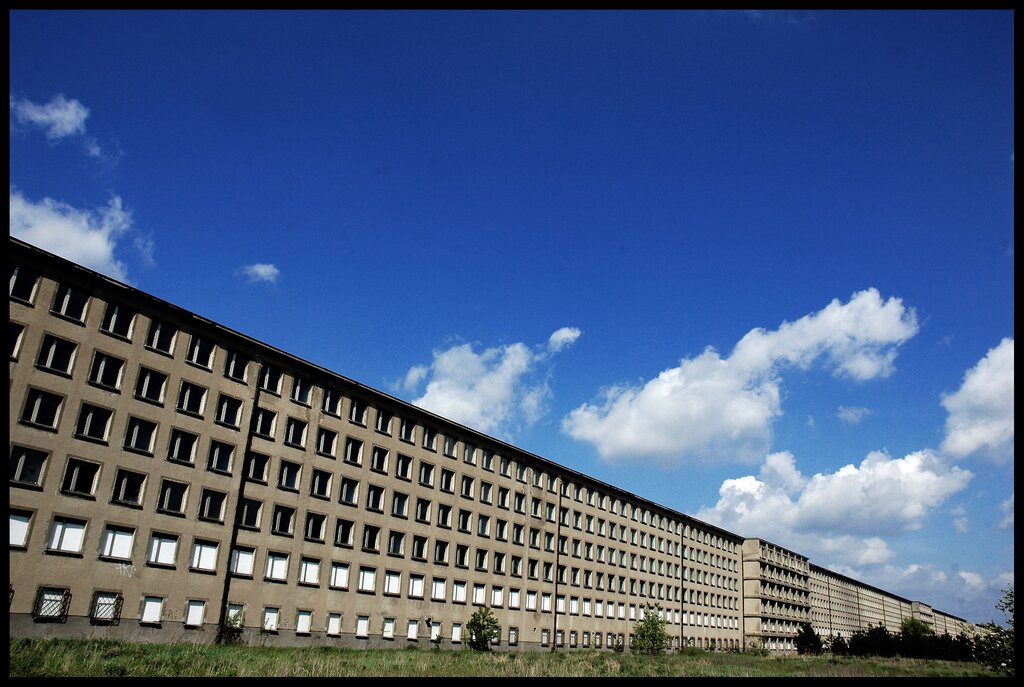 by rhodes, a view of the enormous nazi sea resort in Prora

Three years before the outbreak of WW II, Hitler ordered the construction of what is, until now, the largest concrete building ever build up in Germany, an enormous sea resort along the Baltic coast, also called “The Colossus of Prora”.

This building complex was one of the “Strength through Joy” (Kraft durch Freude or KdF) projects and the first prototype of a massive sea resort, a perfect tool to keep under control masses and, at the same time, spread Nazi propaganda.
In fact, architecture was a fundamental propaganda tool for the Nazis, as they considered monumental buildings to be a reflection of the new German state.
As a part of the Nazi scheme of social engineering, Prora represents the clearest surviving example of the Nazi’s “think big” attitude in regards to architecture.
The complex, roughly 150 m from the beach, extends over a length of 4,5 km and houses 11,463 identical sea-view rooms, arranged in 8 identical six-story blocks of steel-reinforced concrete, each one the length of five football fields (see aerial pictures). 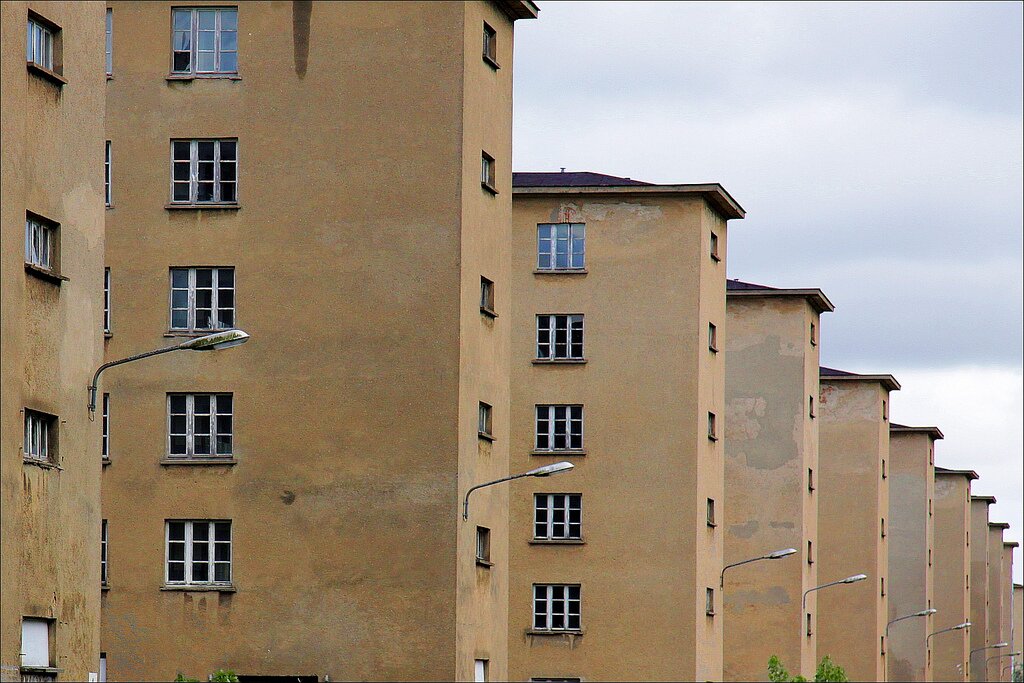 by loop_oh, a view of the enormous nazi sea resort in Prora

The plan was ambitious: the complex was able to host, at the same time, 20,000 guests (workers from Nazi Germany industries) and 2,000 resort workers. Small and narrow rooms, 5 mt long by 2,5 mt wide, constrained guests to join the collective areas, located in every block: restaurants, catering up to 2,500 people per meal, avenues and triumphal staircases, that connected every single block with the beach and with the other blocks. Cinema, theatre, swimming pools and a festival hall completed the monitored, controlled and scheduled vacation resort project.

In 1939, with the onset of WW II, the construction of Prora stopped: the eight housing blocks, the theatre and cinema stayed as empty shells, swimming pools and festival hall never materialised. Prora never served the purpose for which it was intended.
During the bombing campaign, many people took refuge in one of the housing blocks, and later refugees from the east of Germany were housed there.
In 1945 the Soviet Army took control of the region and established a base at Prora, using the buildings as a military outpost for the East German army. But, since German reunification in 1990, buildings have stood empty and uninhabited, suffering heavy vandalism. 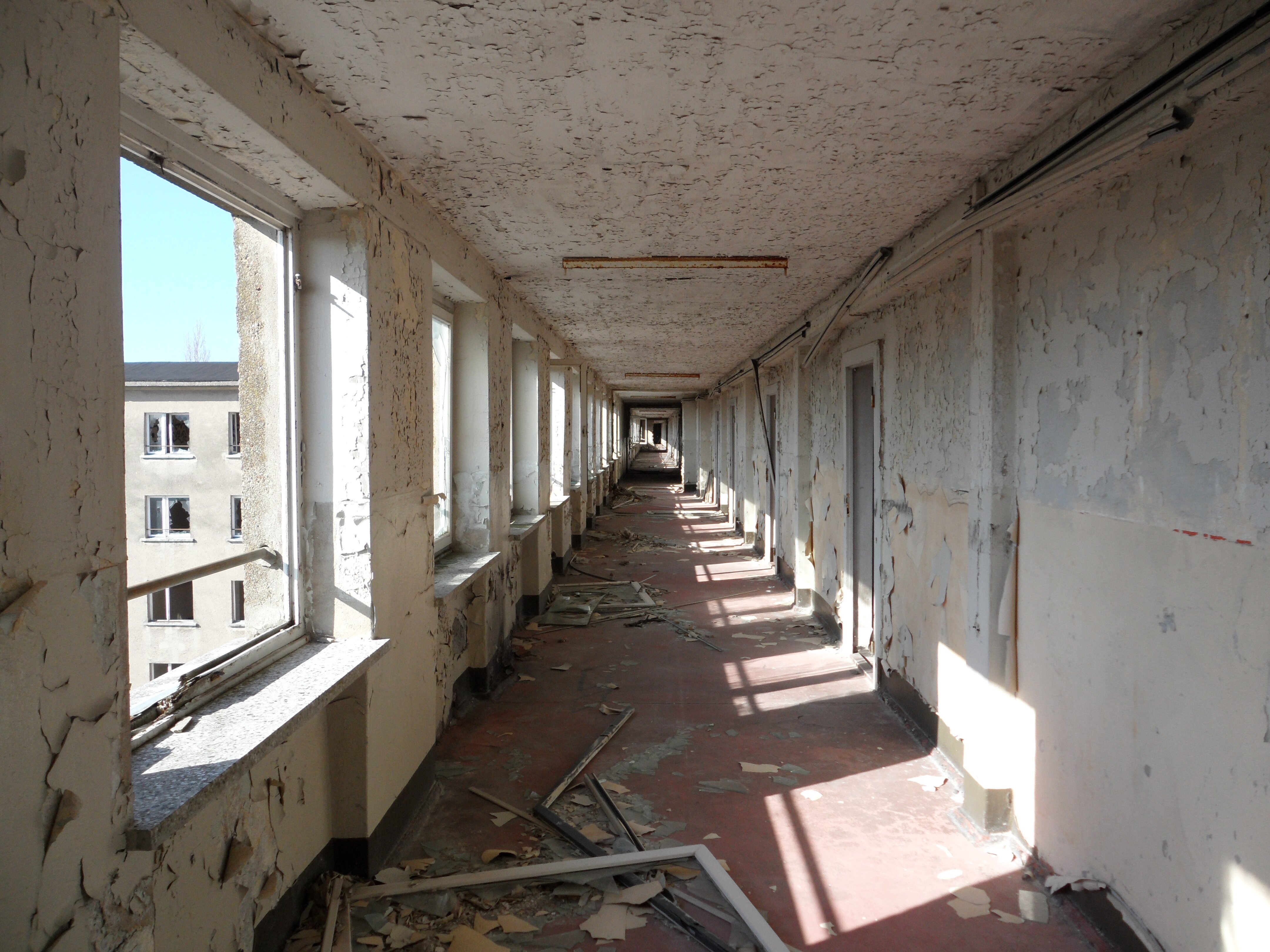 by Wusel007, an inner view of the enormous nazi sea resort in Prora

Parts of the complex are actually in use, as a variety of business have settled here: a hotel, a night club, an aerobics centre, a theatre, two museums and, from July 2011, a youth hostel.
Despite the location, a pristine sandy coast, Prora remains, overall, a creepy place, as so much of it has been left to decay.

Prora’s future is the subject of ongoing discussions among the local community, the federal government and a special foundation formed to preserve it.
Currently, there are some plans for the complex: 3,000 accomodations and vacation apartments are going to be built in blocks 1 and 3, even if the source of financing is not yet clear, but other projects range from a massive old people’s home to a children summer camp.
However, the site is much too large to serve any single purpose.

So the question is: what do you do with this Nazi relic that is too big and too laden with symbolism to destroy, but too enormous to be easily put to use?

This entry was posted in houses. Bookmark the permalink.

4 Responses to The Colossus of Prora, Island of Rügen, Germany